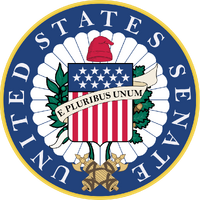 The exclusive powers granted to the Senate in Article One of the United States Constitution include approving treaties prior to their ratification, the trial of federal officials impeached by the House of Representatives, and confirming the Presidential appointments of federal officials.

The primary function of the Senate is to pass national legislation; bills that pass the Senate must also pass the House and be signed by the President in order to become a law. Each state has two United States Senators, giving the Senate a fixed total of one hundred members.

Retrieved from "https://iplaw.fandom.com/wiki/United_States_Senate?oldid=4194"
Community content is available under CC-BY-SA unless otherwise noted.