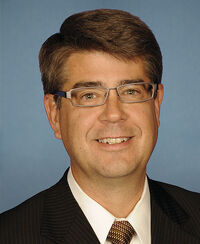 Lee Raymond Terry (born January 29, 1962) is the U.S. Representative for Nebraska's 2nd congressional district, serving since 1999. He is a member of the Republican Party.

He was a co-sponsor of the Stop Online Piracy Act, but withdrew his support of the bill during the Internet blackout protests of January 18th.[1]