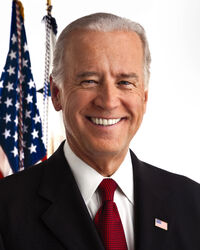 Joe Biden (born November 20, 1942) is the 47th and current Vice-President of the United States, serving in the administration of President Barack Obama. Along with President Obama, Vice-President Biden was re-elected to a second term in 2012. He is the former Senator of Delaware, where he served from 1973 until his resignation following his election to the Vice-Presidency.