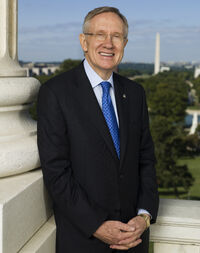 Senator Reid has been a supporter of the PROTECT IP Act, and he scheduled a voted for the measure for January 24, 2012. After the Internet Blackout on January 18, however, a number of PIPA's co-sponsors and other supporters stated their opposition to the bill. Reid planned to hold a vote on the legislation, but sources said he will not require Democrats to vote on it, casting doubt on whether it could receive the 60 votes necessary to receive a Senate floor vote.[1]. On January 20th, he announced he was putting the bill on hold. [2]

Retrieved from "https://iplaw.fandom.com/wiki/Harry_Reid?oldid=8390"
Community content is available under CC-BY-SA unless otherwise noted.