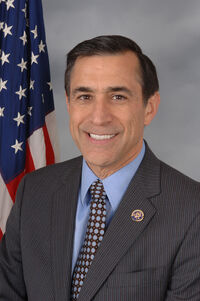 Darrell Issa (born November 1, 1953) is a member of the United States House of Representatives, where he has represented California's 49th congressional district, and previously the 48th district, since 2001.

Issa is a member of the Republican Party and currently serves as the Chairman of the House Oversight and Government Reform Committee. He is also a member of the House Judiciary Committee and is an opponent of both bills SOPA and PIPA. During the markup process for the Stop Online Piracy Act, Issa proposed an amendment that would have kept the bill from targeting search engines and internet providers. The amendment was rejected 22-12. He co-wrote and introduced the OPEN Act in Congress.