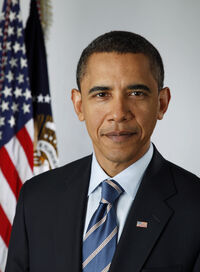 Barack Obama (born August 4, 1961) is the 44th and current President of the United States, after taking office on January 20, 2009. He was re-elected to a second and final four year term in the 2012 election. Obama, a member of the Democratic Party, previously served as a member of the United States Senate, where he represented Illinois from 2005 until he resigned after his election to the Presidency.

One of the Constitutional duties of the President is to sign bills that have passed Congress into law, or to reject them by issuing a veto. If the Stop Online Piracy Act, the Protect IP Act, or some variation of the two passes both chambers of Congress while Obama is in office, it will be his duty to either sign the bill or veto it.

During the debate over the Stop Online Piracy Act, President Obama stated his opposition to the legislation. The White House released a statement saying that the Obama administration's stance was one where intellectual property legislation was important to pursue, but that legislation "must be transparent and designed to prevent overly broad private rights of action that could encourage unjustified litigation and that could discourage startup businesses and innovative firms from growing."[1]

Retrieved from "https://iplaw.fandom.com/wiki/Barack_Obama?oldid=8964"
Community content is available under CC-BY-SA unless otherwise noted.